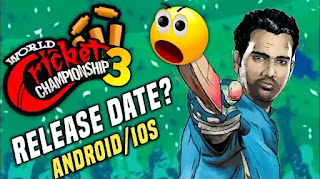 On February 13th the Developers (Nextwave Multimedia) uploaded a teaser, The teaser was really indirectly pointing at the WCC 3. The trailer showed 3 bulbs, 3 Darts, 3 Athletes, 3 Cheetah, 3 Birds, 3 Planes, and many other things which were in pairs of 3. Then at last video showed ‘3 is coming’. Catch a glimpse of the World Cricket Championship 3 (WCC3) trailer below.
Launch Date in India 2020
Then on 7th March they(Next Wave Multimedia) again released a teaser confirming that the World Cricket Championship (WCC 3) is coming and this time the game will also feature Women Player.
They further said that This is a new era for women in sports, let them shine in all forms of sports breaking the taboos. However, they did not specify the launch date of the game. Have a glimpse of the teaser here.
See Also: Real Cricket™ 20 Apk Download

The Wcc3 Beta Apk is out now.

Then after Rumors came out that the World Cricket Championship WCC 3 is going to be released on 2nd April. But WCC posted that Due to the outbreak of Covid-19 (Corona Virus) and consequently Lockdown in whole India the developers were facing issues as the Developer’s Studio is also in India.
The team is collaborating with India’s most popular commentator Aakash Chopra’s flawless, rhetoric Hindi commentary in the game. Australian Cricket legend, Matthew Hayden has also joined the team as advisor and cricket Commentator.

If you have any queries or questions, You can simply ask it in the comment section.